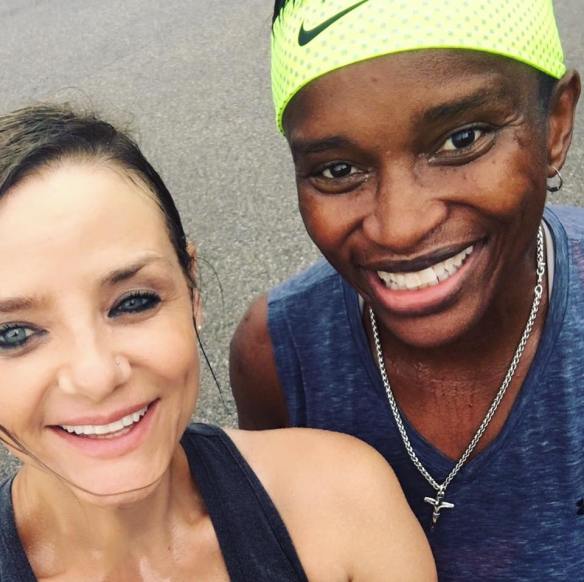 A Rogue since 2008, Tory just completed the Lake Tahoe Midnight Express Ultra (a 72 mile race) in October. She is our featured Rogue for December because of the obstacles she overcame to get there. From being a former smoker to running her first half marathon to now being an ultra-marathoner, Tory is an inspiration for us all!

When and why did you start running?

In 2008 I signed up with Rogue Running to run the Austin 1/2 Marathon. I had only ever run a few miles prior to that and was excited to have coached training and to run with a group. I was trying to improve my weight and health as I was a former smoker (yikes!) and wanted the accountability of being around healthy people.

I also found a much needed Zen running. There is nothing in the world like lacing up and heading out the door in the early morning when the rest of the world is asleep. Those early morning runs have become a treasured part of my daily routine.
My first running coach was Nedra Bray -she taught me so much and most of all believed that in me and that I could learn to run distance! She is a great part of the reason that I run today and I am so very grateful.

I truly believe that each of the Rogue coaches that have been a part of my journey have helped me not only exceed my running goals, but they have also have helped me to trust and believe in myself!

I discovered so much more than I ever imagined becoming a part of Rogue… I found a wonderful supportive community of people who over the last 9 years have become my close friends and family. (literally, I found my wife there!). What a gift.

Describe your first half marathon or marathon race experience. What did it mean to you?

My first 1/2 marathon was the Austin 1/2 in 2010. After a series of stops and starts with running, due to numerous injuries- I was so excited and ready to run my first race.
I met with my coach and developed a firm race plan, attended the Rogue information session on how to run the race (which was invaluable!) and was ready to run.
Austin is such a well-supported race with an overwhelming amount of cheering spectators.

I will never forget towards the end of the race when I was struggling on a hill, someone yelled “Go Victoria”. I was like who is that? How does he know me? And then I was off with a shot of extra energy brought on by that personalized cheer. I don’t know if that stranger knows how much his cheer helped me! Later I would discover my name was on my race bib, ha-ha (for a moment I thought I was famous or something!).
Running has done so much to boost my belief in my ability to conquer goals. In the beginning, I could not run 5 miles and then I did… and then 7 and then 12, etc.
Running my first race meant the world to me – I am hooked!

What has been your biggest running-related challenge and how did you overcome it?

My biggest running-related challenges have been physical in nature. When I first started running, I had a series of hip and sacral stress fractures that delayed my first race goals greatly. Later on, I had a labral tear in my hip and had to have surgery. Through all of that I discovered that cross training is important to my running. I have to strengthen my hips and all of the small muscles that are not utilized during the continuous forward motion of running.

To this day, I am not very good at the cross training part- although my injuries seem to be a thing of the past. However, going into 2018 I plan to make it a point to run the miles AND hit the gym. My goal is to become a strong, well rounded runner.

What has been your biggest running achievement or defining moment since you started?

I have had so many wonderful experiences and achievements running. I love making goals bigger than my dreams, train for them, put in the hard work and see what happens. So far, with each run, race and goal, I have not been disappointed. Even though I may not always have the time I want or hit the mark I am striving for… I learn and then I am able to apply my lessons to the next goal.
Therefore, each goal (regardless of the outcome) builds upon the previous and better prepares me for the next.

In 2013 and 2014, I was introduced to The Tahoe Triple by my friend and coach, Carolyn Mangold. The races cover the circumference of Lake Tahoe by running a marathon a day for three consecutive days for a total of 78.6 miles. I was hooked and love the rough and raw nature of the races and quickly decided that someday I wanted to run the ultra.
On October 14th of this year I ran the Lake Tahoe Midnight Express Ultra. It is a 72 mile race that starts at 9pm. The race is completely unsupported for the first 48 or so miles. No restrooms, water stops, medical…. not even the roads are blocked off or with signage that runners are present. You have to have to be lit up like a Christmas tree and have your own crew (who is your lifeline).

I trained in the ATX summer heat and showed up October 13 ready to run with my crew of one. The race had quite a few stops and starts and was even cancelled at one point due to construction. I was told I could have a refund or run the final marathon. Sadly I resigned myself to running only 1 marathon- but 2 hours before go time, the race was back on with a different course.

I was mentally unprepared, had been running around with no rest all day and had given away all of my nutrition hours before. I decided that I was not going to run the ultra- when Dori urged me to phone Coach Carolyn. Carolyn said “You need to run this race”.
In less than 2 hours, my Rogue family pulled together and gave me three bags of nutrition, went and picked up my singlet and re-registered me for the race and sent me out the door.

The race was a once in a lifetime experience and I was so fortunate to have Dori as my crew. Intuitively, we developed a routine and settled in for the long haul. It was completely dark, cold, hilly, hard, cars drove at me, I came upon a ginormous bear-size porcupine and I wondered many times throughout the night if I would even make it.
I ended up running 73.14 miles (got a little lost!). I was not aware when I crossed the finish line that I had placed 6th overall and that I won 1st place female!!!

Had I given up, I would have missed so much. I am very grateful to my Rogue family and to Dori for everything. While I am short 3.5 toenails right now, I hope to do the race again someday and utilize what I learned!

I am not sure what is next. I am waiting to see what speaks to me in terms of goals, so for now I am #JFR and enjoying it! 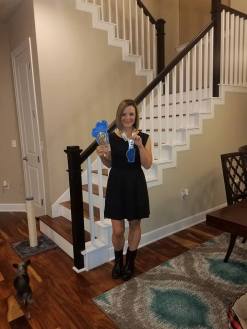